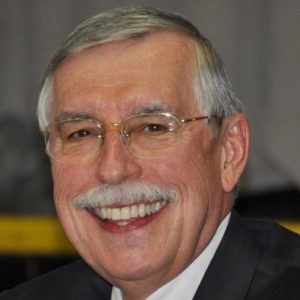 Founder, Retina and Vitreous of Texas
Board Member, LVX System

Mike Lambert, MD is a retired Air Force Colonel who began developing new procedures and equipment while a cadet majoring in Physics at the USAF Academy. He worked at the Laser Weapons Lab between his junior and senior years and completed the project at USAFA in his senior year. Instead of completing a PhD in physics as planned, he went to undergraduate pilot training and became a T38 supersonic jet instructor pilot. After the Vietnam drawdown, he completed medical school, a residency and fellowship with Robert Machemer at Duke—where he developed the first indirect laser with Reece Landers—and began a career of innovation in instrumentation and techniques developing instruments with Storz, B&L, CooperVision, Alcon, Iridex, Synergetics, Innovatech, Medical Workshop (DORC) and others and in development of the Accurus and Constellation systems. He specialized in complicated surgery for PVR and diabetic retinopathy as well as submacular surgery, ultimately performing over 36,001 cases. His goal was a stem cell cure for AMD with Opexa in Houston and the Reeve-Irvine Center. He developed instruments to do the surgery, but viable cells were never produced. Lambert is a founding investor in the Houston Technology Center and an investor with the Houston Angel Network and the Central Texas Angel Network. He is co-founder and/or board member of numerous non-profit organizations including the Machemer Foundation, Guide Dogs of Texas, Nantucket Retina Foundation, USAFA Endowment, Greenon HS Foundation, and Giampetro Scholarship. Lambert is the Founder of Retina and Vitreous of Texas and currently serves on the Board of LVX Systems, a company that has developed visible light communication (VLC) technology.